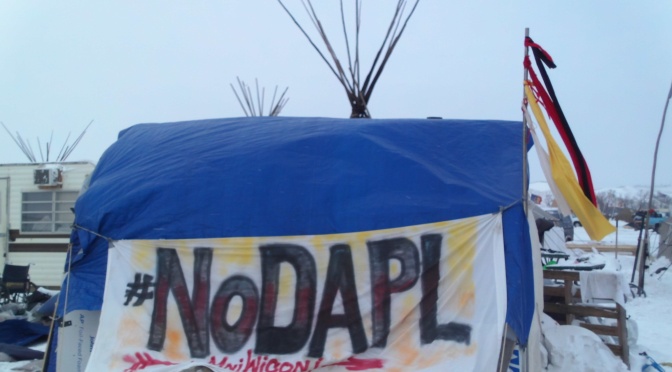 Army Corps of Engineers Denies Easement to DAPL to drill under Lake Oahe and Missouri River until an Environmental Impact Statement is Completed, Alternative Routes Explored

“In light of today’s decision by the Obama Administration, the Water Protector Legal Collective calls on the State of North Dakota to immediately drop criminal charges against the more than 550 Water Protectors who have been arrested related to their peaceful and prayerful protest against DAPL these past nine months. The WPLC also calls on local law enforcement agencies to pull back from the Water Protectors’ camps and dismantle the road blockades and checkpoints they have instituted, and further demands that federal and state agencies conduct a full investigation into law enforcement abuses against Water Protectors which have included violations of their First, Fourth, and Fourteenth Amendment rights,” said Angela Bibens (Santee Dakota), WPLC lawyer.

The 1,172-mile DAPL would connect the Bakken oil fields in North Dakota to refineries in Illinois, shipping as much as 570,000 barrels of crude oil per day. The Bakken Shale holds an estimated 5 billion barrels of oil, and is producing approximately 900,000 barrels per day. In April of this year, researchers at the University of Michigan found that the Bakken field is emitting approximately 2 percent of the world’s ethane, about 250,000 tons per year into the air, directly affecting air quality across North America. These emissions, combined with combustion of Bakken oil, are major contributors to the global climate crisis that threatens the well-being of our environment, future generations, and the Earth.

Energy Transfer Partners, the Texas company behind Dakota Access, and its affiliated entities including Sunoco Logistics, have a long history of violations of environmental laws including pending lawsuits by the states of New Jersey, Vermont, Pennsylvania, and the Commonwealth of Puerto Rico and the City of Breau Bridge in Louisiana over MTBE contamination of groundwater, as well as citations for releases of hazardous materials from its pipelines and facilities in Ohio, Oklahoma, Louisiana, Missouri, Texas, Pennsylvania, and Hawaii. Pipelines leak and spill. In one year alone, there were over 300 pipeline breaks in North Dakota. Numerous pipeline spills of millions of gallons of oil and contaminants into the Missouri River and its tributaries have already occurred. In January, over 50,000 gallons of Bakken crude oil spilled into the Yellowstone River in Montana.

Those concerned are urged to call local and federal agencies below to demand (1) an immediate end to construction of the $3.8 billion Dakota Access Pipeline, (2) the immediate cessation and a full investigation into law enforcement abuses, and (3) that all criminal charges against Water Protectors be dismissed. The WPLC also encourages calling the White House to share your support for today’s decision.

The Water Protector Legal Collective is the National Lawyers Guild legal support team for those engaged in resistance to the Dakota Access Pipeline. It maintains a 24/7 presence on-site at the Oceti Sakowin camp near Cannon Ball, North Dakota.

Please Check out my Fairy Garden Page. I make custom made Fairy Gardens!
%d bloggers like this: